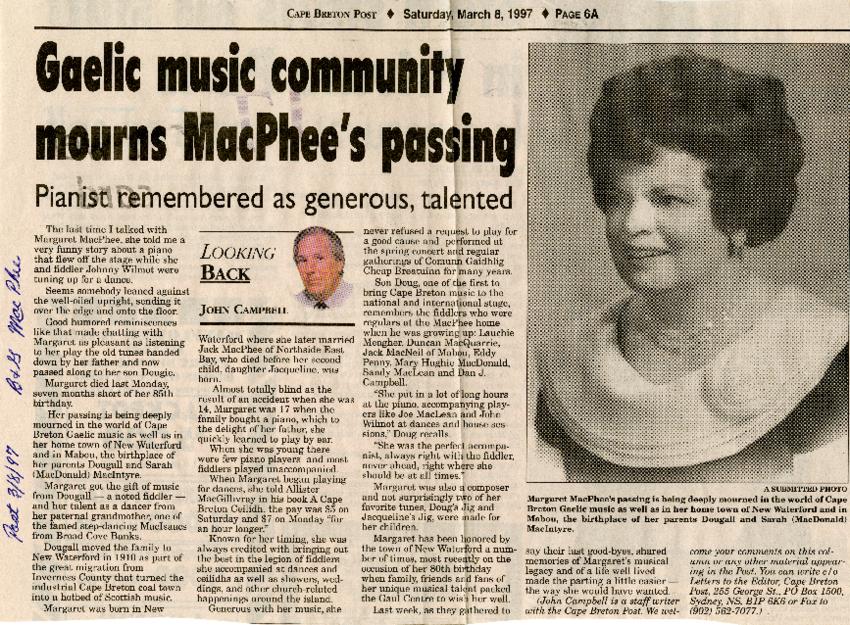 Margaret MacPhee was a pianist, step dancer and composer who lived in New Waterford for most of her life but who performed, whenever asked, all over the Island. Her name was synonymous with Cape Breton Scottish music for more than half a century. Her contribution was remarkable, especially given that she was almost totally blind by the time she was 17 years old as a result of an accident at eleven years of age while playing on a swing. She was a pioneer of a particular style of piano chording and was famed for her ability as an accompanist. Charles MacDonald, of Cape Breton University [formerly the University College of Cape Breton] said, " She brings out the best in the fiddlers... she'll make them play."

Born into a musical family, both Margaret's grandfather (John Dan MacIntyre and father (Dougald MacIntyre) were from the Mabou area and played the fiddle. As a young child in New Waterford, she was surrounded by Celtic music. In Margaret's own words, "Every Friday and Saturday when Papa was living, all the musicians used to come to our place... They'd take turns playing and, oh, it was wonderful!” (from A Cape Breton Ceilidh by Allister MacGillivray, June 1988).

As a teenager, Margaret used to jig tunes – a form of mouth music where the tune is hummed or sounds put to the rhythm and melody – and pretend to chord at the end of the kitchen table, and for her seventeenth birthday, her father bought her a piano. Being nearly blind as the result of an accident, she took no lessons, but learned by herself to play by ear. Her father would practice fiddle tunes and she would accompany him. Inevitably, other musicians from the neighbourhood began to drop in and play as well. Her reputation as one of the finest accompanists a fiddler could find began to grow. She recorded with a number of recognized fiddlers of the day, including Johnny Wilmot. Margaret and her sister Florence were also fine step dancers and they appeared at many local concerts and social events. But Margaret's first love was the piano.

Margaret married Jack MacPhee and had two children, Doug and Jacqueline. Jack died before Jacqueline was born. Doug became a highly respected Celtic pianist himself who noted that his mother could "complement a fiddle" better than anyone else he ever heard. Two of Margaret's most famous compositions – Doug’s Jig and Jacqueline's Jig – were written for her children. She said that she was not wealthy but that she could give them the gift of her music.

She was also a generous community member, doing a great deal of charity work in New Waterford, playing for benefit concerts across Cape Breton whenever she was asked, encouraging young musicians, and always known to have a pot of soup on the stove and a hot pot of tea brewing when visitors came to her door.

Margaret was honoured in 1980 by the community of New Waterford and its Gaelic Society, as well as the Cape Breton Fiddlers Association. Tributes to her generosity and ability as a musician were given and fiddlers including Buddy MacMaster, Carl MacKenzie, John Wilmot and Father Angus Morris filled the evening with Celtic music. She was a warm, talented woman who overcame her visual disability and played a key role in the preservation of the Celtic musical heritage in Cape Breton.

File consists of various newspaper clippings re: New Waterford pianist Margaret MacPhee, including her obituary. File also contains a copy of Greg MacLeod's eulogy delivered at her funeral in 1997, and a remembrance article from The Cape Bretoner (Summer 1999).