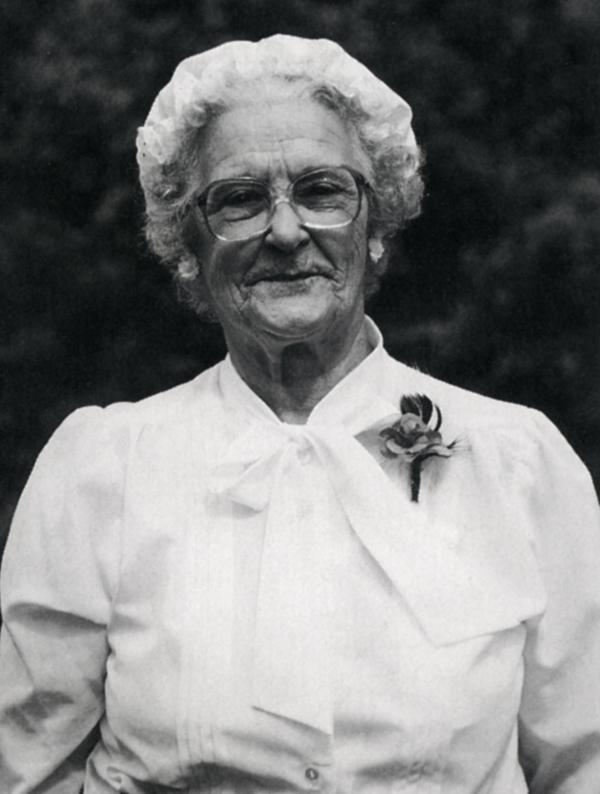 Lucy Doucet was born on March 1, 1909 in Belle Cote, Inverness County, the fourth of nine children in Marcellin and Flavie Chiasson's family. As often was the case during her era, her childhood was marked with tragedy and this contributed to her being a strong survivor throughout her 96 years. Five of her siblings died in childhood – three of them after they were stricken with the Spanish Influenza of 1918. Of those, one died in the bed she shared with Lucy, Lucy being nine at the time. At her parents' suggestion, she left school after grade four and worked in a lobster canning factory in Margaree Harbour each spring for three years.

As a child, Lucy was surrounded by the songs of her community and she remembered them. She learned them from her father and at kitchen parties and family and neighbourhood gatherings. She learned many traditional French, English, and Irish songs from a teacher at Belle Cote School. Her son Dan recalls that "Many of the English songs she attributed to the 'Timmons boys'. They were neighbours, their house set high up at the foot of the mountain and apparently she could hear them singing outside." She developed a passion for music that was to be lifelong.

Lucy worked for a time in Halifax in various family homes and at the Queens Hotel. In 1935, she married Henry Doucet and six years later they moved back home to Belle Cote with their children Daniel and Florence. They would spend the rest of their lives together there. Songs continued to fill their lives. Daniel recalls that "during the winter months, there were many family and neighbourhood gatherings. Relatives travelling from Cheticamp to Inverness by horse and sleigh to take the train would stop overnight, and there would be an evening of card playing and singing. Aunts and uncles from Grand Etang, 10 miles away, would come to spend a few days in winter time, again, by horse and sleigh."

Lucy also sang as she worked in the kitchen, especially the slower songs of war, or sailing or broken hearts. Dan recalls that "I especially remember her singing 'Rosette' as she merrily worked to the accompaniment of her Singer sewing machine while she worked the foot pedal tirelessly. Apart from the sewing machine, she was always unaccompanied, although a neighbour, Marie a Georgie, sometimes strummed a cake tin for the faster numbers." After her husband Henry died, Lucy, living alone in her late 80s, would start the day by singing in bed for a half hour before she got up.

She mastered a variety of traditional crafts – including knitting, crocheting and weaving. But she turned her back on traditional hooking when she was very young after her mother traded in runners that she had hooked for the hallways and bedrooms for oil cloth – the 'in' thing at the time. She was also a skilled seamstress and somewhat sharp dresser. In her very old age, when someone complimented her on her appearance, she replied, "It's bad enough being poor without looking poor."

Lucy told stories, laughed and sang songs into her old age. She worked hard all her life but also lived life to its fullest. The songs that she sang, many of which were recorded, preserved a Cape Breton Acadian heritage that would have been lost without her contribution. She passed away at the age of 96 on March 15, 2005.

File consists of the following items: