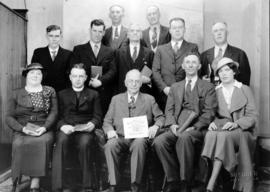 Item is a photograph of a dozen members of Sydney Academy's 1936 Gaelic class; individuals are identified on the reverse of the photograph. The man in the front centre of the photograph is holding a sign that says, "Sgoil Ghaidhlig, 1936, Ghlace Bay." (Glace Bay Gaelic School).

Item is an audio recording of various informants discussing Gaelic culture and identity as well as a number of songs and musical performances.

Buddy MacMaster North Shore "A rovin' we must go..."

Margaret MacLeod Winnipeg (Lweis) Children have no Gaelic; they are easy to teach

Item is intended to serve as the first in a series of textbooks for teachers and learners of Gaelic.

Fonds consists of a collection of documents relating to the Conference, held in Sydney on October 15,16, and 17, 1987.

Joint Committee for Gaelic in Schools

This fonds consists of correspondence, brief and other papers pertaining to the historical and educational position of the Gaelic language in the schools of Nova Scotia.

Item is an audio recording of Mrs. Archie Kennedy. She speaks on life in Broad Cove and Margaree, education in the area, local lore, and prevalence of Gaelic language especially in the church.

Early days at home in Margaree...

"Hard shoes and woolen stockings" Mogans were pulled over the shoes to keep the feet warm.

A day in school...The day started with a prayer, then the pupils stood in a row and read. Next came the spellings. Places of honour were won according to one's ability to spell. This was an ungraded school.

Teachers and method of teaching. The Friday program.

Nothing was learned in Gaelic in the schools.

The Church in Margaree. Prayers and Catechism all learned in Gaelic.

Item is an audio recording of a conversation with Roddie F. Nicholson and John Nicholson.

Song concerning the building of the house

I can write a letter, I can read a letter, and I can send a letter anywhere!

What subjects were taught in school

Did they write well in the back woods?

What about the cats whiskers?

Tell us all you know about local history

Diseases and cures of the times

Were people brought into build houses?

No one was lazy in those days. No very rich, no very poor.

Could they make a living off the land now as they did in your times?

Diseases such as appendicitus were certain death in those times?

Was there any heavy drinking in those times?

Story of the Jack O Lantern

Item is the report of the first meeting of a committee committed to having Gaelic taught in the public school system. They are acknowledging the demands of the Council of Public Instruction and discussing ways to meet them.

Fonds consists of:
The 1920 petition by M.R. MacLeod to allow Gaelic to be taught in public schools.
A letter to the editor of the Casket urging readers to speak Gaelic to their children in the home.
Various writings in Gaelic, including a story attributed to Joe "Eòs a'Ghobha" MacNeil of Christmas Island, a story about a humorous trip for Boisdale to Christmas Island and a congratulatory speech for the 50th anniversary of Johnny A. and Peggy MacKinnon of Rear Iona.

Item is an audio recording of a Gaelic conversation with Stephen Rory MacNeil of Barra Glen, N.S.