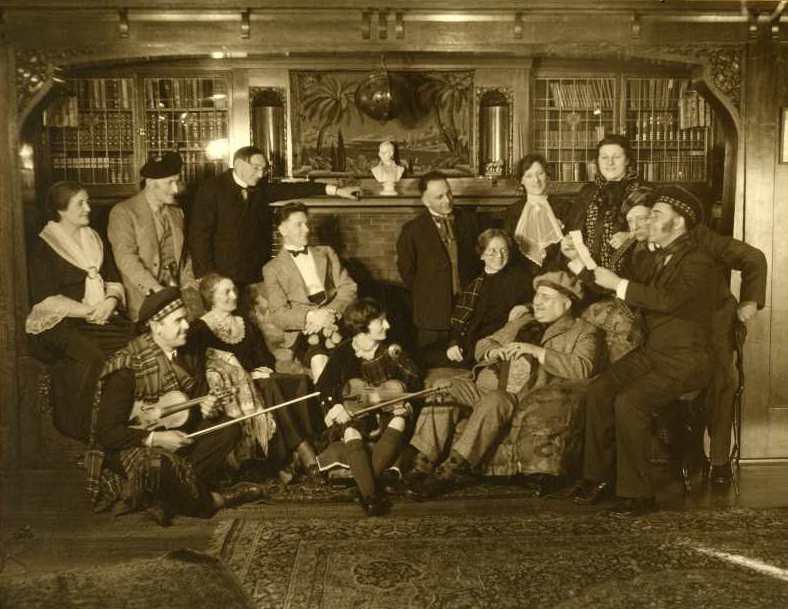 Item was donated to the Beaton Institute Archives by Mr. Tom Sullivan.

Item is a photograph of the cast of Cotter's Saturday Night, a radio program broadcast from Sydney in the 1930s.

Photograph was taken at the “Cromarty” estate built by John Kenneth Levison "Jack" Ross ca. 1905. It was located on Kings Road in Sydney.

The newspaper article accompanying the photograph reads: The Prof. Bernie McIntosh Orchestra was organized in the early twenties and played extensively throughout Cape Breton right through to the forties. Their longest playing stint was at the Highland Golf Links, Dominion. Year after year they played the gala balls in the Glace Bay which included the Firemen’s Victoria Day Ball, the Veterans Vimy Ball, the Policemen’s Ball, the Knights of Columbus Ball and many others. Another Saturday night regular was the Rex Hall, Glace Bay (the Kings Dancing Academy). For the McIntosh Orchestra a week’s summer engagement would read something like this – Campers Dance at Mira on Monday night, the Highland Golf Links, Dominion on Tuesday night, Scotian Club, Mira on Wednesday, the IOOF Hall, Glace Bay on Thursday, Iceland Dance Hall, Glace Bay (now the Firemen’s Hall) on Friday and back to Campers Dance, Spain’s Pavilion, Mira on Saturday night. Often the Mira dances were covered live by CJCB radio and one of the first dance broadcasts done by CJCB emanated from Mira with the McIntosh Orchestra performing.

During his heyday Bernie was sometimes referred to as the “Waltz King” and his tickling of the ivories was a tremendous his with many, many captivated dancing audiences. They had the sound of the tenor band with Bernie giving a touch of the Carmen Cavallaro and Eddie Duchin style. It is easy to romanticize the music of that day. It was music that had an instantaneous acceptance which left the listener humming the tune for days after. As a critic of noisy percussion and over-amplification, I would welcome a return to the melodic lines and lyrics of the favourite numbers of the McIntosh era. Bernie McIntosh won his place as an organist at St. Anne’s, Glace Bay, while only in his teens. He continued with Glace Bay and Sydney choirs devoting a lifetime of service. Even to the end he was choir director and organist at St. Theresa, Sydney.

The harmony he wrote for orchestra was beautiful and his work in radio is probably best remembered in the CBC network series which emanated from CJCB radio known as “Cotter’s Saturday Night” which ran for 76 weeks in 1935. The picture of the Cotter’s group was taken in W.N. MacDonald’s home on King Road which now forms the main entrance and dining room section of the Wandlyn Motel, Sydney.