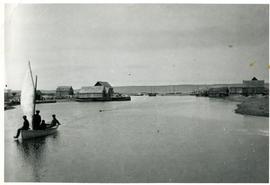 Item is a photograph of Capt. John Macdonald on a small boat with others in Gabarus harbour during World War 1.

Item is a photograph of Captain John MacDonald sailing in his boat with his sons William, Dan and Charlie. Photograph taken by G. Fred Mann. 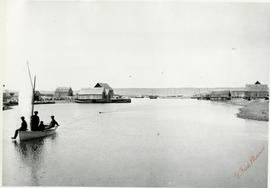 Item is a photograph of Capt. John MacDonald on a small boat with others in Gabarus harbour during World War 1.

Item is a sound recording of Fonn is Furan. All songs sung by Donald John MacDermaid of Framboise and Massachusetts.

Item is a photograph of the Gabarus Centennial Pageant. The Pageant was put on by the 4H Club, held at the Gabarus Community Hall. The play was about a girl who had received new boots from Boston and tricked her friends into doing her chores for her so she wouldn't get her boots dirty.

Item is a sound recording of Gabarus Milling Frolics, hymn singing and precenting.

Item is an audio recording of a secltion of Gaelic songs as sung by Lauchie Gillis, and Philip MacDonald. Features :

Mr. Fred Reid Speaks of the Catholic Church which was there 68 years ago.

Mr. Fred Reid Discusses the different families of Gabarus (N.S.) and their Religions

Mr. Fred Reid Said that the Roy family, after leaving Scotland, changed their name to Reid.

Mr. Fred Reid The Campbell's tried to kill them in Scotland

Robert Morgan Tell us what you know about the Loyalists

Robert Morgan Asks what is known about "Squatters Rights"?

Mr. Fred Reid Armstrong - vessell blew up and he was drowned

Mr. Fred Reid The land could be had a long time before the grants were given

Mrs. Truman Clark How many factories were there in times?

Mr. Fred Reid Was there a battery around here?

Mr. Fred Reid Asks why Gabarus (N.S.) bigger than it is now?

Mrs. Truman Clark Why did the fishermen go on strike? They went on strike because of the small price of lobster

Mrs. Truman Clark Where did you sell the lobster? They were canned and sent to Halifax (N.S.), then shipped over-seas

Mrs. Truman Clark Speaks of his work in a lobster cannery - .05 cents an hour

Mrs. Truman Clark Tell us about the politicians around here in your time...

Mrs. Truman Clark What do you know about Alex Johnson and Dr. Kendall?

Robert Morgan What can you tell us about the First World War?

Mr. Fred Reid It is often clear in Gabarus (N.S.) when it is very foggy in Louisbourg

Robert Morgan Asks if there are any Mi'kmaq here

Robert Morgan Asks Mrs. Reid her age, and where she lives.

Mrs. Carita Reid The first Bagnell was General Bagnell who came during the war.

Mrs. Reid Gives the history of her ancestors

Mrs. Reid Gives the history of the old house on Rouses Point (N.S.)

Robert Morgan Asks about the story of the French ship...

Robert Morgan How long were you a Sunday school teacher

Robert Morgan Do you know anything about the Lobster fisheries here in Rouses Point (N.S.)?

Mrs. Carita Reid Were automobiles common in the early days?

Mrs. Carita Reid Do you know anything about the Mi'kmaq in the early days?

Item is a photograph of Rouse Island, Gabarus. Photograph taken by Stella Mann.

Storytelling on the Gabarus-Framboise Coast of Cape Breton: Oral Narrative Repertoire Analysis in a Folk Community

Item is a pamphlet outlining life in Gabarus, Cape Breton during World War 1. The pamphlet includes the Gabarus Honor Roll.