Fonds consists of Gaelic census of Nova Scotia and Prince Edward Island: answers from clergy to circular inquiry and a letter from Mr. Campbell concerning a visit to Canada. 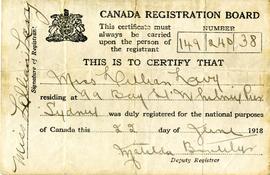 Fonds consist of the Canadian Popular Theater Alliance, including the following: 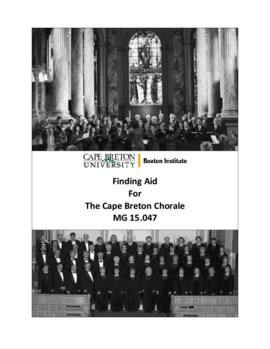 Fonds consists of records documenting the performances, tours, community activities and governance of the Cape Breton Chorale. Fonds includes sound recordings from original performances, radio broadcasts, and taped interviews with choir members. Textual documents include financial reports, correspondence, programs, newspaper clippings, interview transcripts, awards, membership information and histories about the Chorale. Colour photographs and 35mm slides are found in the records along with a comprehensive collection of scrapbook albums documenting the activities of the group from its inception until 2010. A small collection of VHS video tapes are also available featuring the televised program "Now the Bells Ring with Rita MacNeil" as well as other performances.

The Cape Breton Development Corporation came into existence in 1967. This crown corporation was established to promote and assist the financing of industry on (Cape Breton) Island and to acquire the interests of the major coal producer in the Sydney Coalfield and reorganize and operate the mines with a view to the rationalization of coal production. This is a very extensive collection including many DEVCO statistics, reports, letters, information on operations and development, equipment, photos and government studies.

Fonds consists of textual records and photographs related to the Cape Breton Highlanders, including World War 1 correspondence, reports, and photographs.

Municipal History was made on August 2, 1995 when a ceremony in Sydney's Centre 200, with Mayor John Coady and 21 Councillors, launched the new Cape Breton Regional Municipality with resolutions required to bring a new level of Government into being. Flags of Sydney, Cape Breton County, Glace Bay, New Waterford, Dominion, Louisbourg, North Sydney, and Sydney Mines were formally passed over to the Mayor signify the transfer of power to the new Regional Government.

Minutes of Capeview Cooperators, a cooperative of fishermen in the area covering Main-a-Dieu, Bateston, Baleine, Little Lorraine, and Scaterie. At one time they owned a large lobster cannery in Main-a-Dieu. 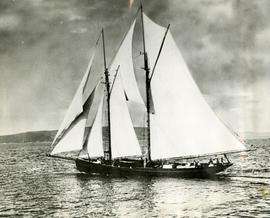 Fonds consists of correspondence, papers, scrapbooks referring to ships, shipping, sailing, and items that were of interest to Captain John Parker. Included is a scrapbook that includes information about "Gaelic speaking Blacks" and photographs from a sailing trip to the West Indies.

Fonds consist of alphabetical listing of various writers pertaining to Cape Breton. and their bio-biography's. Chisholm and MacKinnon undertook this project to justify a course credit.

Fonds consists of programs and posters of the Castle Players Society: A. Script for play Castle of Steel: The Legend of Moxham’s Castle produced at UCCB Playhouse. 1. Manuscript includes a background preamble, production schedule, set and set pieces, and cast of characters.

M.R. Chappell was born at Chappell's Mills, Cumberland County, Nova Scotia in 1887. His family moved to Sydney in 1901 and M.R. became General Manager of Chappell Brothers in 1910. The company was a lumber supply and contracting business. He served on the executive of many local and national service clubs and organizations and was an alderman in Sydney from 1924 to 1928. He purchased Oak Island in Lunenburg County in the 1930s and was associated with the search for the alleged treasure there until his death in 1981.

Fonds consist of a receipt for salary as teacher at Rear Ball's Creek for the term ending 6 July 1894, with record of payments. 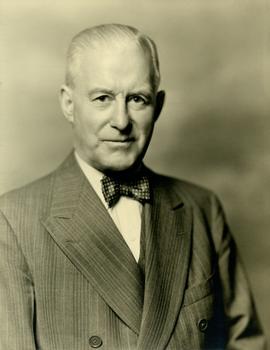 Fonds consists of a scrapbook assembled by Charles Sutherland that includes some World War 1 clippings. 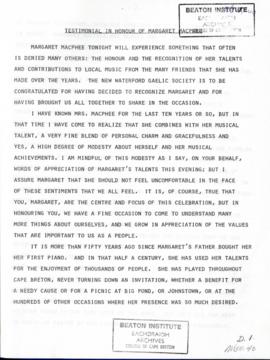 This fonds consists of documents relating to: the Highlander Press Co. Ltd; pulpwood cutting in Cape Breton County; Roman Catholic Diocese of Antigonish; speeches. Dr. Charles MacDonald was a member of the faculty of the University College of Cape Breton.

Fonds consists of an assessment ledger giving names of taxpayers. 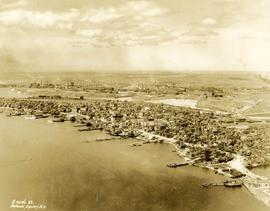 This fonds consists of papers of the Society, including newsletters, minutes of meetings and membership statistics.

Fonds consists of a reproduction (photocopy) of the story, “Black Christmas.” 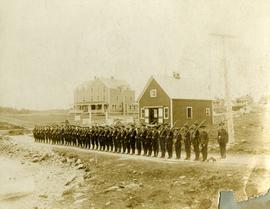 Commander of Troops in Louisbourg to Headquarters, 6th Division fonds

Fonds consists of a report describing the condition of troops stationed at Louisbourg during World War 1.

Fonds consists of the constitution and minutes of a meeting of the St. Andrew's Society of Sydney. 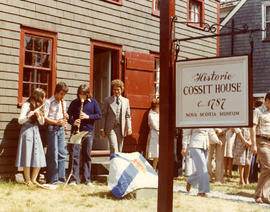 Fonds consists of a letter book, legal documents, correspondence, and a report. 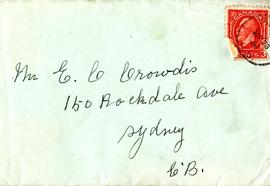 Fonds consists of a lament, in Gaelic, written on the death of his wife, with translation into English.

Fonds consists of reproductions of a letter and reply to The Casket regarding an article, "Early Days in Cape Breton" with special reference to the Gaels, criticizing the way in which they were portrayed in the article. 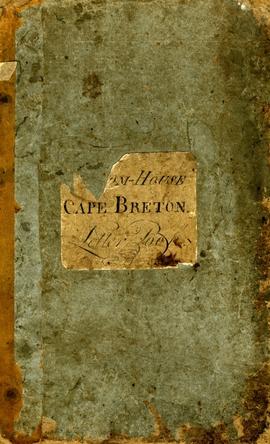 Customs records of the Port of Sydney. These early records contain valuable material on shipping, customs officials and early port development of Sydney and North Sydney, particularly in the period immediately after annexation to Nova Scotia; Volumes 6219, 6220, 6221, 6223, 6224.

The original ledger (MG 16.22 A) situated at Sydney dates from January 20th 1806 to July 1824 with additional sparse entries for 1835, 1836, and 1838, 1839/41. Includes written copies of letters from customs officer Philippe (Philip) Dumaresq in Sydney, Nova Scotia to the customs office in London, England. Requests for supplies, discussions around staffing, noting goods seized and vessels in port.

Poem “December 6, 1917” describing the Halifax Explosion of that date.

The collection consists of sixty cassette tapes of both primary recordings and some commercial material collected
by Donald John MacDermaid from the early 1950s to the late 1980s.

Recordings taken in this collection cover a spectrum of Gàidhlig culture from Scotland, Cape Breton, and Massachusetts "The Boston States." In-House recordings include Gàidhlig stories and songs by singers such as MacDermaid himself, his brother Norman, Florence MacLeod, Ross MacDonald, Kenneth Morrison, and others. Fiddle & pipe tunes from renowned Cape Breton musicians like Winston Fitzgerald, Lee Cremo and Bill Lamey round out the musical selections. Commercial recordings include songs by Norman MacLean, Archie Grant, Calumn Kennedy and other Scottish singers.

Fond consists of poem, “The Bochan Bridge of Canso.”

Fond consists of the following poem entitled “The MacDonald-Lynch Wrestling Match” by D. D. MacKenzie (1859-1927) of Lake Ainslie and North Sydney. He was M.P. for Cape Breton North-Victoria, 1904-1923 and judge of the Supreme Court of Nova Scotia. The poem is a tribute to Dr. H. N. (Hudy) MacDonald who won the wrestling championship of America 16 August 1881. 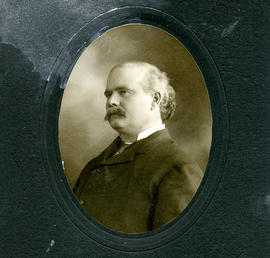 Fonds consist of records of the personal, professional, political and judicial life of D.D. MacKenzie.

Fonds consist of the original screenplay “The Bay Boy” by Daniel Petrie, filmed in Glace Bay. Permission required to use.

Debra Meeks, a native of Ontario, collected songs from the Aspy Bay area during the summer of 1978. The Tapes [T-1328] include not only songs but stories and local history.Cassette tapes of folk songs and stories from Aspy Bay, 1978. Transcripts of songs collected by Miss Meeks with biographies of several composers: Stanley Collins, Dan Norman Cummings, Alex MacDonnell, Earl Cameron and Ernest Tingley McEvoy, 1978-1979. (Tape 1182 to 1186). Pamphlet: Irish traditional folk songs in Halifax: a preliminary study, 1980. 28 pages. Cassette: The question of the survival of Irish traditional folk song, both by Debra Meeks. [Tape #2014]

Fonds consists of 27 songs in Gaelic, two hymns in English and a newspaper account of the MacDonalds' 50th wedding anniversary in 1969. Mr. MacDonald, a farmer from Framboise, composed many Gaelic songs, the most famous of which was "Failte Cheap Breatunn". See also Tapes 107, 231, and 232.

Fonds consists of papers including poems and a genealogy of the MacFarlanes, compiled by D.D. MacFarlane.

Fonds consists of a letter from Rev. Neil MacLeod regarding bridge at Salmon River (1843) and appointment as Postmaster at Grand Mira South (1873).