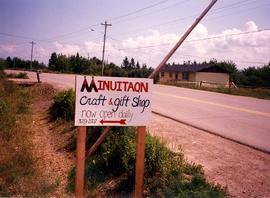 Item is a photograph of the sign for Minuitaqn Craft & Gift Shop in Eskasoni, N.S. 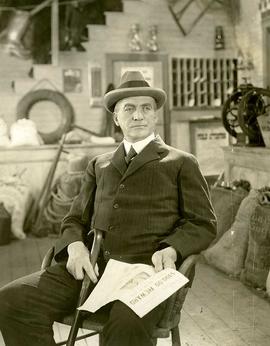 Item is a photograph of J. Madden, an actor who appeared in the movie "The Sea Riders". This was a film by The Maritime Picture Co. of Canada Ltd. 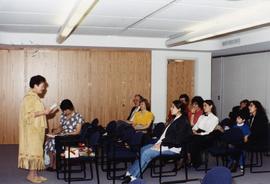 Item is a photograph of Rita Joe reading to a small group of people. 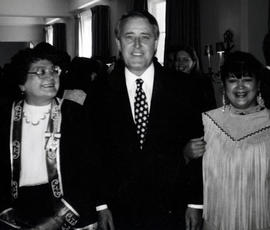 Item is a photograph of Rita Joe with her daughter Caroline and Prime Minister Brian Mulroney. 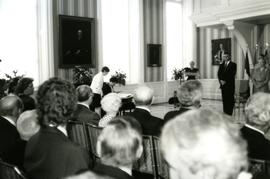 Item is a photograph of Rita Joe signing a record after her induction into the Privy Council. The Governor-General and Queen Elizabeth II are also featured in the photograph. 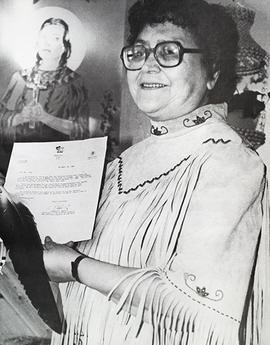 Item is a photograph of Rita Joe holding the proclamation of her reception of the Order of Canada. 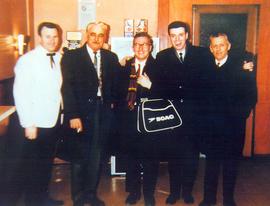 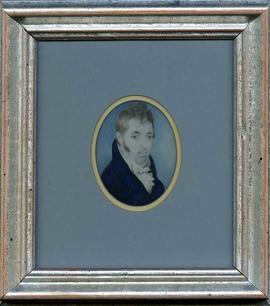 Item is a miniature portrait of Ranna Cossit. He was the first Anglican minister in Sydney and the founder of St. George's Church.

Collection is 14 books of meeting minutes from the Town Council of Glace Bay.

Annual Report of the Town of Glace Bay, Nova Scotia for the Year 1915

Item is the 1915 annual report for the Town of Glace Bay, Nova Scotia.

Invitations to Tender - February to May 1966

File consists of Morrison's Store cash journals. A file list is available below.

File consists of a letter from the Cook County Graduate School of Medicine, personal correspondence, letters congratulating him on the publishing of his book “Memoirs of a Cape Breton Doctor”, letters from people telling Dr. MacMillan how much they enjoyed his book and their hopes for a sequel.

File consists of materials related to Viola Desmond's arrest, including copies of letters from Desmond to the Ministry of Justice, and the posthumous apology and pardon she received in 2010 from the Province of Nova Scotia. 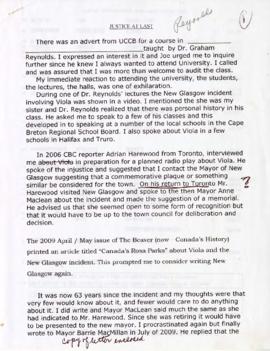 Item is a typewritten, three-page draft essay with handwritten notes by Wanda Robson about how she became a student at Cape Breton University (CBU), her activism and the work she did to promote the legacy of her sister, Viola Desmond. The essay was printed on the back of information sheets about Crime Stoppers Bingo. 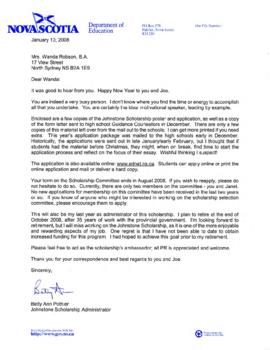 Item is a photocopy of an article on page A3 of The Chronicle Herald titled, "SMU speaker compares impact of Canadian racism to apartheid."

Item is a photograph of Allan J. MacEachen on a state visit as Minister of .......

File consists of a folder on Union Papers

File consists of correspondence relating to the administrative operations of Morrison's General Store in St. Peter's.

Sub-series consists of political records relating to Alex A. Morrison's involvement as the Richmond County Secretary for the Progressive Conservative Party of Nova Scotia and pertaining to the 1956 Nova Scotia general election.

File consists of the pamphlet, "Proceedings of the 1943 Annual Meeting, Municipal Council of the Municipality of the County of Richmond, Nova Scotia." 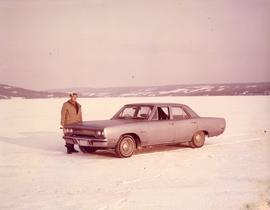 Item is a photograph of Dr. MacMillan standing next to a car and the caption on the back reads, “On his beloved Bras d’Or Lakes”. 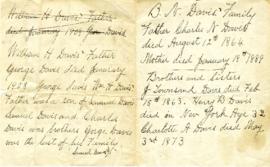 Item is a handwritten genealogy of the Benjamin Newton Davis family.

"Viola Desmond honoured on site that once did her wrong"

Item is a newspaper clipping from The Chronicle Herald titled, "Viola Desmond honored on site that once did her wrong," with a story about a group of people meeting at the former Roseland Theatre in New Glasgow, Nova Scotia to honour Viola Desmond. 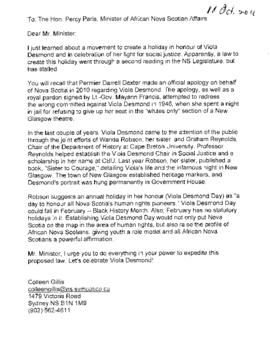 Item is a letter from Colleen Gillis to Hon. Percy Paris, Minister of African Nova Scotian Affairs, asking him to support the creation of Viola Desmond Day.

"A look at new and upcoming Cape Breton books"

Item is a newspaper clipping from the Cape Breton Post about books being published in and about Cape Breton, including Sister to Courage: Stories from the World of Viola Desmond, Canada's Rosa Parks by Wanda Robson. 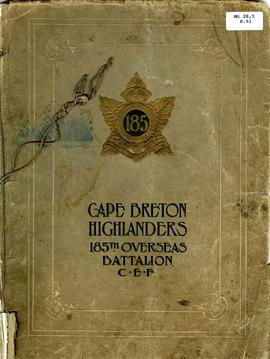 File contains a booklet, a photocopy, and a microfilm copy of "A Short History & Photographic Record of the Cape Breton Highlanders 185th Overseas Battalion C.E.F." that features photographs and details such as rank, regimental number and origins, of the officers, infantry, and other groups of the battalion.

Folio consists of various post-World War II publications including The General By-Laws of the Royal Canadian Legion, The Veterans' Land Act, a Cape Breton Island, Nova Scotia holiday planner, The National War Memorial, A Reference Guide to Navy, Army, & Air Force Insignia, the 58th annual report of the Commonwealth War Graves Commission, The Canadian Army in the Netherlands 1944-1945, The Canadian War Museum, issues of Legion Magazine from March to July 1979 and issues 62,63, 65, and 68 of the History of the Second World War magazine publication.

File consists of political speeches written by Dr. MacMillan; Addressing Angus L. MacDonald in Bridgewater in April 1949, expressing his condolences on the passing of King George VI as well as congratulating the Department of Education on it’s success, partial speech talking about the highway needs in Victoria County and the boom in tourism, speech concerning the legalization of the practice of Chiropractic, speech detailing an act to incorporate the Maritime Telegraph and Telephone Limited, speech detailing the damages done by draggers, survey of requirements for the fishing industry, proposition for a committee and minister of Fisheries, a speech thanking the people for nominating him, improving road conditions in Victoria County, speech asking for Cape Bretons rightful share in the tourism industry, a speech thanking the people for re-electing him for the third time, speech thanking the committee for their invitation to the annual celebration of John Cabot setting foot on Cape Breton Island, speech about public health in Nova Scotia, speech at the Gaelic Mod and the gathering of the clans, annual meeting for the Victoria County Liberal Association, speech from the throne debate, addresses the lack of rehabilitation programs for coal miners in the event of a mine closure and the utilization of Nova Scotia’s natural resources, financial figures and an article from the Royal Gazette Extraordinary detailing the House of Assembly Session.

File consists of a folder on leases and mortgages

File consists of correspondence from the records of Indian Affairs Superintendent, A.J. Boyd. Topics include the distribution of blankets, correspondence pertaining to Indian Day Schools, the purchasing of supplies and food items, and supply lists. Dates are not readily discernible.

File consists of fourteen small books noting the store's stock from 1950 and 1952. A file list is available below.

File consists of two company purchase ledgers. A file list is available below.

Contains 3 letters between Morrison's and the Department of Veterans Affairs.

Item is three photocopies of the December 31, 1946 edition of The Clarion newspaper published in New Glasgow, Nova Scotia featuring articles about Viola Desmond's 1946 arrest at the Roseland Theatre in New Glasgow and her court appeals.

Item is two copies of one article published in the Cape Breton Post about a Heritage Minute produced by Historica Canada about Viola Desmond.