The series consists of a black and white photograph taken in 1950. The image is of the members of the South Bar Knitting Club.

This series consists of two minute books and one photograph of the South Bar Knitting Club. Though the club was formed in 1938, records of meetings begin for the organization on January 6, 1939, and continue until February 12, 1951. The minutes of the club record the election of officers, fundraising events, and general business of each meeting. The minutes detail the involvement of the club in fundraising for the war effort during WWII. Various engagements with other community organizations such as the YMCA, Red Cross, and Imperial Order of the Daughters of the Empire are recorded.

File consists of: 1 Draft Plan of a pamphlet for the window project with original sketches, names, and formatting. 1 Pamphlet from Lumière Art Festival, 2017. 1 Pamphlet titled “The Community Art-Science Window” & Also “The Art Room”. 47 Photos: Community ArtSci Window Project.Contains photos 19-001-32001 to 19-0447-32047. 3 Documents describing the “The Art Room” at the New Dawn Centre for Social Innovation. 1 Document Titled "Summary of information from the CBU YCW Internship document relating to the Community Window Project." 5 Documents related to the Application form for Lumière 2017. Acceptance Email from the Lumière Event and Outreach Coordinator. 2017 Lumière Contract and Conditions of Participants. Window Project Sketches, and photos of Location for Window Project. 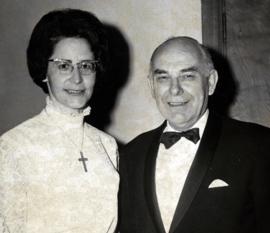 Series consists of audio-visual recordings, textual records, photographs and sheet music related to Sister Rita Clare, her work in the music department at Holy Angels High School and her work with the Cape Breton Youth Choir.

Series consists of audio recordings of the Holy Angels Chorale in concert and for on-air performances.

Series consists of a set of holiday cards, invitations and programs.

Series consists of four images. One is dated February 24, 1929 and states "at a prospecting shaft, (?) Big Glen. In the photo MacLeod, Beaton, Nolan, and A.J. MacDonald" and three others of Ignatius Nolan.

Series consists of correspondence between Angus and Ignatius and James Nolan, as well as Margaret MacDonald, Cassie Fortune and others. One file (A.7) consists of two letters from Folklorist Helen Creighton asking Angus MacDonald about Rhoddy McLeod's ghost.

Series contains records documenting the history of the North Sydney branch of Western Union as well as evidence of operation through telegrams and an accounting ledger.

Series consists of a 1923 list of Western Union employees at the North Sydney branch as well as a series of files related to past Western Union employees who donated materials to the North Sydney Historical Society. Individuals represented are George Baggett, Isabel Cameron, and M.J. Walsh. A file containing a menu and photograph from the 1907 annual Christmas party is also included.

Series consists of reports and technical drawings outlining specifications for the installation and operation of portable carrier terminals and for shaping signals with signal-shaping amplifiers on non-loaded submarine cables.

The series also contains a miscellaneous folder of notes, drawings and blueprints related to signal frequency and office equipment wiring.

Series consists of photographs related to the process of laying underwater cable via the Western Union Cable ship Lord Kelvin, and also images of the North Sydney Western Union office and its staff. Many of the images include names listed on the back of the photograph.

The series consists of photographs, programs, correspondence and promotional materials related to the Bartown Festival held annually in North Sydney.

Series consists of research files and course preparation for various history lectures and presentations related to Dr. Morgan's teaching career. Some of these files include training sessions provided to interpretive staff at the Fortress of Louisbourg, as well course content for his College of Cape Breton / University College of Cape Breton (now Cape Breton University) classes. Photographs included in the files were used as illustrations during the course delivery.

Series consists of textual records of instructions and souvenir programme marking the opening of the Canso Causeway on August 13, 1955.

Series consists of books accumulated by James Bryson McLachlan and his family between 1744 and 1941 in Scotland, England, and Canada, pertaining to Socialism, Communism, mine conditions, Russia, religion, literature, and history. Some books include signatures or annotations written by McLachlan; gifted books include notes from close friends or political comrades.

Series consists of 2047 negatives, positives and prints created by various photographers that document the history of Holy Angels Convent and School, as well as student life at Holy Angels, community outreach, the school music program, and other miscellaneous activities.

Series consists of photographs taken or collected by Wanda Robson that document her early life, Viola Desmond's early life in Halifax, Wanda's efforts to gain recognition of the life and legacy of her sister, her family life, her education, and various events and ceremonies.

Series consists of 11 books of fictional poetry, interviews, biographies, case studies, and history that explore race and the Black experience in Nova Scotia, Canada, and the United States. Viola Desmond is featured in Viola Desmond's Canada by Graham Reynolds, which includes a chapter written by Wanda Robson.

Series consists of news clippings, prints, photocopies, letters and emails of correspondence, one scrapbook, and one magazine surrounding Viola Desmond's education, career, and arrest; Wanda Robson's efforts to establish provincial and federal recognition of Viola's legacy; Wanda Robson's education and work with Dr. Graham Reynolds; and events, ceremonies, and honours at which Wanda has discussed her social justice work and Viola's life.

Series consists of one journal dating between 1910-1914, two poems, two letters of correspondence, one note, and one newspaper clipping.

Items are a collection of various financial documents from the Town of Glace Bay. The records range from account books, payroll records, financial accounts and statements, daybooks, and business ledgers.

Items are records from various departments in the Town of Glace Bay. This includes: the school board, police, and the board of health minutes, journals, orders, ledgers, and cashbooks.

Collection is a set of documents recording municipal assessment and rate rolls/books as well as tax records for the town.