Item is a postcard of the wharf at Piper's Cove. 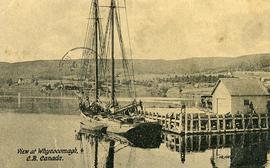 Sailing Ship at wharf at Whycocomagh 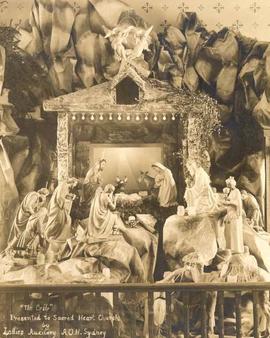 Item is a photograph of Nativity Scene at Sacred Heart Church in Sydney, Nova Scotia. 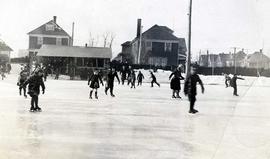 Item is a photograph of people skating on an outdoor skating rink, possibly in the Ashby area, Sydney. 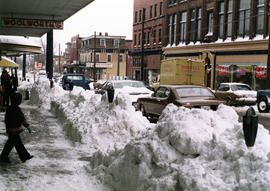 Family tree chart of the MacIver and MacInnis families.

Three genealogical books regarding the history of the MacIver, MacInnis, and Strachan families.

Thirty three 7" and six 12" reel to reel tapes of concerts by the Cape Breton Chorale. All recordings include programmes. Twenty blank CD-R's were donated at the same time for the duplications requested.

Folk music/poems, typed with added handwritten note. Some of the material was composed by donor, some by students.

Folk music/poems, typed with added handwritten note. Some of the material was composed by donor, some by students.

Item consists of a painting of the Coal Wash Plant at Old Sydney Collieries in Sydney Mines. The painting features the coal preparation site with a man and dog sitting in the foreground.

Donation consists of sound recordings, articles, clippings, sheet music and photographs related to piping. A significant portion of the collection pertains to the donor's academic and professional career.

Gertrude E. N. Tratt: "The only information known about this is that it was listed for the years indicated (1910-1913) in the Canadian Almanac and Directory."

Gertrude E. N. Tratt: "Only the almanacs attest to the existence of the Star. It was described as a weekly, with a circulation of 1,200 and with Independent-Labour interests."

The Inverness County Guardian was published in Port Hood every Wednesday by D. W. Jones, the publisher and editor of the newspaper. A yearly subscription costed $2.00 per year in Canada and $2.50 per year in the United States. The newspaper was Independent in politics.

The Inverness News and Mining and Shipping Gazette

Ned MacDonald: "On August 4, 1904, the first issue of the "Inverness News", published by A.S. MacAdam, appeared on the streets. The newspaper had a tendency to exaggerate the potential of the town, sold for two cents, was printed weekly, and was enthusiastically received. It informed, organized and agitated through its editorials. It became a vehicle for the proclamation of views on social, economic, cultural, and political issues. The "Inverness News" was the link that expressed and documented the evolving days of the town."

J. W. D. Stearns: "The Morning Sun is the only daily newspaper east of Halifax, Nova Scotia, and is printed every morning (Sunday excepted) at Sydney, Cape Breton, office No. 106 South Charlotte St. It gives the cable and telegraphic news by special services direct from New York and other centres of information, and lacks none of the facilities of a thorough newspaper. Subscription price is $6 per year. Advertising rates $1 per inch first insertion, 25 cents each continuation. Special rates on advertising contracts according to space and time."

"A newspaper published in the interests of Finlay MacDonald, Conservative Candidate in Cape Breton South."

Gertrude E. N. Tratt: "The earliest of the predecessors of the Bulletin was the Eastern Journal, which began as a weekly in 1889. J. C. Bourinot was editor and publisher and the Journal was Liberal in sympathy. Its subscribers usually numbered about 1,000 and paid $1 p.a. (per annum). It contained four 20" x 26" pages. About 1910 it merged into the Journal-Bulletin."

The Daily Gazette was published in Glace Bay, Nova Scotia by the Gazette Publishing Co., Limited. It was published every afternoon, Sundays and legal holidays excepted. The price of a single issue was 2 cents.

Gertrude E. N. Tratt: "Volume 1 of the Forward made its initial appearance in Truro on January 19, 1893. It was subsequently published at different times and for varying periods at Windsor, Halifax, Wolfville, and, since 1954 [ie. 1946] at Digby. The publication in 1893 represented the first time that the Sons of Temperance had assumed the full financial responsibility for its periodical. The editors have been successively W.S. Sanders, Rev. A. A. MacLeod, Rev. Edward Morris, and Rev. G. E. Levy. It has four 12" x 18 1/2" pages with five columns each and appears bi-monthly. Its subscription rate has climbed from an original 25 cents p.a. (per annum) to $3.50, and its circulation has fluctuated considerably between 800 to 1,400."

Scrapbook contains news clippings, correspondence, photographs and other textual materials documenting the life and careers of the Foote and Bearse families.

Item is a sound recording featuring the following:

Two comic poems: “Prayers of the MacDonalds” and “The Highlandman’s Prayer.”

One Poem titled "Farewell to Boulardarie."

Fond consists of poem, “The Bochan Bridge of Canso.”

Poem “December 6, 1917” describing the Halifax Explosion of that date.

Fonds consist of “George Beckett” a ballad composed by Mr. Penny giving the story of Beckett’s execution for the murder of Nicholas Marthos 30 April 1931.

Item is a report written by Iain Howieson for HIST4705: History in the Archives.

Item is a report written by Dr. Robert Campbell titled "The Truck System in the Cape Breton Fishery: Philip Robin and Company, 1843-1852"

Steel City: Immigration and Industrialization in Hamilton and Sydney 1891 - 1914

Item is a report written by Mitchell Jabalee for HIST3104.

The Eastern Beacon was established in 1879 and was published on Wednesdays. The newspaper consisted of four 23" x 33" pages and cost $1.25 per annum. J. A. Cogswell was both the editor and publisher of the Eastern Beacon.

Gertrude E.N. Tratt: "A veritable chain of publications following each other in close succession from 1840, finally ended with the Cape Breton Times. The earliest in the series was the Cape Breton Advocate published by Richard Huntington and edited by Otto S. Weeks. Its prospectus was dated 24 July 1840 and read: "It is proposed to publish the Sydney, Cape Breton, as soon as a sufficient number of subscribers can be obtained, a Weekly Newspaper to be called "THE CAPE BRETON ADVOCATE". It will be printed on a quarter sheet of fine paper, the size of the Halifax Pearl at the rate of Fifteen Shillings per annum payable half yearly ... a correct and copious Marine Journal will be published in every number, and the fluctuations of the American, West India, and Provincial Markets will be duly noticed ... a general summary of foreign and domestic intelligence will be given ... with a correct record of local events. During the sessions of the Legislature the proceedings will always be briefly noted. Communications, when not of a personal nature will ... be ... inserted. The day of publication will be Wednesday"."

Gertrude E. N. Tratt: "The Herald, the oldest weekly in Cape Breton, began as a weekly with four 24" x 36" pages and a circulation of slightly more than 800. James W. Gould was editor and publisher, but within five years was succeeded by A.C. Bertram. Under Bertram's ownership the paper was more than tripled its circulation to 2,750 and its format altered, first to four 19 1/4" x 28 1/2" pages, and then to eight 15" x 23" pages. During these years it was Conservative in politics.
Sometime before 1910 the North Sydney Herald Publishing Company had begun to issue the paper. Its politics changed from Liberal-Conservative to Liberal, then to Independent. The circulation rose to a peak of 4,700 in 1918, and then began a steady decline. While it retained its eight pages, these reverted to Bertram's 19 1/4" x 22 1/2" size.
For some years after 1920, a daily as well as a weekly edition was published. At that time J. S. MacDonald was manager of the Herald Publishing Company. The daily, like the weekly, was an eight page newspaper. It cost $6 per annum, was Liberal in politics, and it had a circulation of 1,700.
The daily apparently ended about 1928 but the weekly continued for another 20 years. In the mid-thirties it became once more politically Independent."

The item is a scrapbook documenting the years of 1965 – 1966 at Xavier College. Highlights covered in the scrapbook include photographs of faculty and students of Xavier College. Also, included are textual documents such as news clippings related to operations and events at the school and in the Cape Breton community.

Men of the Deeps

Fonds consist of songs of the Cape Breton mining communities. Also including a paper by John C. O’Donnell, Director of the Men of the Deeps.

The item is a scrapbook documenting the years of 1960 – 1977 at Xavier College and the College of Cape Breton. Highlights covered in the scrapbook include textual documents such as news clippings related to the operation and events at the school. A few of the specific items found in the scrapbook are: