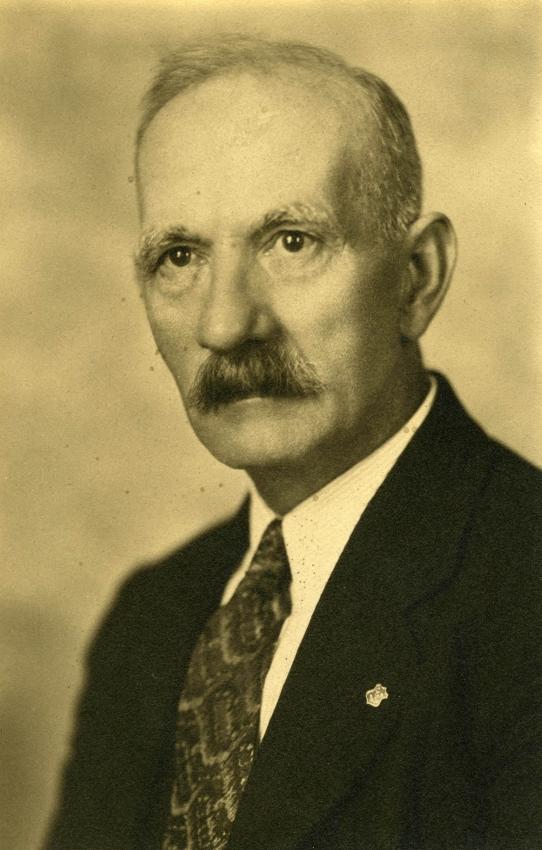 James Bryson McLachlan (J.B.) was born February 9, 1869 in Ecclefechan, Scotland to farm labourers, Esther Bryson and James McLachlan. At age 10, McLachlan left school to work in the Coltness Iron Company Lanarkshire mines with his father, but remained home-schooled by his mother who taught Calvinist religious literature. Later, McLachlan would identify as Baptist, and later again Presbyterian and United. Catherine (Kate) Greenshields and McLachlan were wed in 1893 by a Baptist minister and had 4 children before emigrating to Sydney Mines, Nova Scotia in 1902, where McLachlan worked in the Princess colliery. Carrying with him the knowledge and experiences of poor mine conditions and worker wages from Scotland, McLachlan became a local union leader and established himself as a prominent voice for workers’ rights in Nova Scotia coalmines.

Shortly after his arrival, he became a local in the Provincial Workmen’s Association (PWA). He was elected secretary-treasurer of District 26 United Mine Workers of America (UMWA) in 1909; UMWA dissolved in 1915 and re-established in 1919, but McLachlan continued his role as a UMWA officer between 1916 and 1918. During this period, McLachlan moved to a farm on Steeles Hill, Glace Bay, in 1913. McLachlan’s involvement in these unions granted the opportunity for him to play a significant role as a leader in the Cape Breton mining strikes of the 1920’s. This four year struggle fought for employee control, liveable wages, and eight-hour work days. During these strikes, McLachlan was convicted of seditious libel in 1923 and was released in 1924. In 1933, he became president of the Worker’s Unity League, a position he held until 1936.

Beyond union representation, McLachlan formed the first Cape Breton local of the Socialist Party of Canada in 1907 and in Sydney Mines in 1909. In 1916, he was a Socialist candidate for the House of Assembly, and represented Cape Breton’s Independent Labour Party in 1917 and 1918 as president. Until 1936, he was also a member of the Communist Party of Canada. In addition to his political affiliations, he was editor for Maritime Labour Herald until 1926 and the Nova Scotia Miner from 1929-1936. McLachlan died at the family farm at Steeles Hill on November 3, 1937, and is buried at Greenwood Cemetery in Glace Bay with his wife, Kate (d. 1939).

Collection consists of artifacts, two volumes of Karl Marx, a child's cap, and a block of salt; McLachlan's personal library of books that he owned consisting of socialist, communist, religious, and labour material; and textual records that include poetry, notes, correspondences, and one journal. The material spans between 1744 and 1941, and consists of records from Scotland, England, and Canada. The material in this collection shows McLachlan's interest and involvement with labour movements and his desire to improve conditions for the working class in Cape Breton.