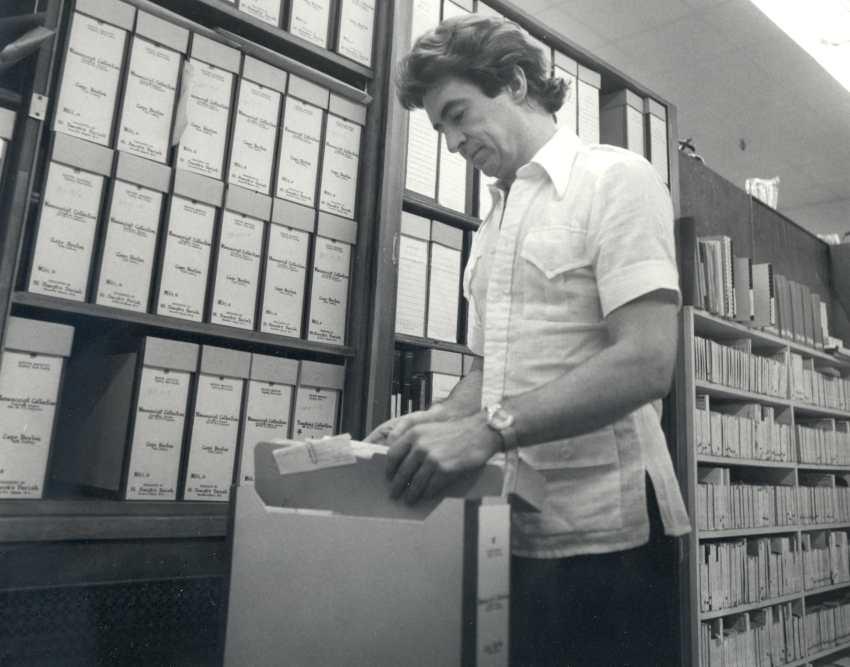 4.75 metres of textual records, photographs and other material

Robert James (Bob) Morgan is remembered for his outstanding contributions to the archival community, the heritage sector and the scholarly field of local history, particularly the history of Cape Breton Island. In all Bob’s involvements he brought a joyful enthusiasm and genuine respect for the opinions of others. He loved to conduct research and Bob shared freely that research in the classroom, with researchers in the archives and the community through his many public lectures and publications.

Born and raised in Windsor Ontario, Bob received his BA Honours in History and English from the University of Windsor in 1961. Following graduation Bob travelled to Cape Breton in 1962 to take up a lecturing position at Xavier College in Sydney, Nova Scotia. For the next four years he resided in Sydney and taught Canadian history and political science at the new College.

It was during this time Bob became involved with a small but action-oriented group of individuals keen to save an aging and derelict stone church in the North End of Sydney. The church eventually became known as St. Patrick’s Church Museum and the group formed themselves into the Old Sydney Society in 1966. The Old Sydney Society has grown from its initial incarnation of one church museum to include the operation of the Centre for Heritage and Science in the historic Lyceum Building, the Jost House Museum and Cossit House Museum all situated in Nova Scotia’s only designated historic district – Sydney’s North End. Their success continues today as the Old Sydney Society is in its 46 th year.

Bob, through his involvement as a founding and continuing member of the Old Sydney Society, held executive positions numerous times and continued to work toward a thriving heritage community in the area. He volunteered with the Sydney Steel Museum as well as the Lyceum Heritage Society, offered advice to forming societies and advocated on behalf of archives and museums to municipal, provincial and federal government departments as a means to enhance ones engagement with their community. He believed that archives and museums were foundational to responsible citizenship; one must know the history of their community, the struggles and the successes.

Bob’s early teaching and community involvement led him to further his education. Bob obtained his MA in Canadian History from Queen’s University in 1964. It was during his graduate studies at Queen’s that Bob met his future wife Barbara (Babs) MacKinnon a native of Inverness Cape Breton.

Following the completion of his MA Bob worked with the Public Archives of Canada in Ottawa. It was here Bob learned to be an archivist and he developed an interest in the colonial period of Cape Breton history. Bob continued his studies in History and completed his Ph.D. at Ottawa University. In 1971 he was offered the position of Senior Historian at the Fortress of Louisbourg National Historic Park where he worked for the next five years.

Working as the Senior Historian from 1971-1976 Bob helped to shape the interpretation of the largest historic reconstruction site in North America. Bob’s keen interest in social history meant he brought the lives of these early settlers, citizens and militia to life and encouraged Cape Bretoners, Nova Scotians and Canadians to know and engage in their past.

In 1976, following the tragic loss of Sr. Margaret Beaton, College of Cape Breton Principal Fr. MacLennan invited Bob to join the history faculty and become the Director of the Beaton Institute archives. During his time as Director, Bob transformed the archives into a research centre out of which has grown the wealth of regional and Cape Breton studies research and programming which is evident at Cape Breton University today. Bob remained with the University for 26 years and in 1990 was appointed Cape Breton University’s first Dean of Research and Development.

Through his position at the Beaton Institute Bob became an advocate of Nova Scotia’s growing community archives and museum movement. In 1982 Bob chaired the first organizational meeting of what would become the Council of Nova Scotia Archives (CNSA). He then served as the CNSA’s first president from 1983-1985. Bob left his mark on the Nova Scotia archival community, laying a strong foundation for other archivists to build upon.

Bob’s contribution was also felt nationally as he was a founding member of the National Archival Appraisal Board and in 1976 served as Vice-President. In 1979 Bob was the Atlantic Canada representative for the Archives Committee of SSHRCC which during his term investigated the reform of the national archival system. Bob also served as President of the Association of Canadian Archivists from 1985-1986.

During his life Bob was committed to his wife Babs, Cape Breton Island, teaching, heritage, research and writing, and his garden. It is in Robert J Morgan’s honour the series Cape Bretoniana is established and through his legacy this Grant-in-Aid Program is possible.

This fonds consists primarily of textual records documenting the career of Dr. Robert J. Morgan. Over the span of almost five decades, Dr. Morgan held the position of historian, archivist, professor, author, and community leader. Records series documenting Morgan's early career at Xavier Junior College (1962-1966) and then as historian at Fortress of Louisbourg National Historic Site (1971-1976) are included as well as records connected with his time working at College of Cape Breton/University College of Cape Breton (now Cape Breton University - CBU) as professor of history and Director of the Beaton Institute. While at CBU, Dr. Morgan also held the first Dean of Research and Development position. Dr. Morgan was active in the heritage field both at a national and provincial level working with the Association of Canadian Archives (ACA) and the Council of Nova Scotia Archives (CNSA).

Other series in the fonds reflect Morgan's work with local historical societies and community organizations dedicated to the promotion and preservation of Cape Breton's built and documentary heritage. A substantial amount of research notes, index cards and manuscript drafts accompanying Morgan's publications are also included, as well as some evidence of post-retirement contract work.

Series featuring Dr. Morgan's personal and family history include a small portion of records related to Dr. Morgan's involvement with St. Anthony Daniel parish and the Diocese of Antigonish. Personal records and photographs of Dr. Morgan's wife, Barbara Ann Morgan (nee MacKinnon) and her parents (Justice A.H. MacKinnon and Annie MacKinnon nee Ryan) are also found in the collection. Dr. Morgan's love for gardening and botany are represented as well.

A small amount of artifacts including awards and family memorabilia are also included.

Arrangement imposed by the archivist.