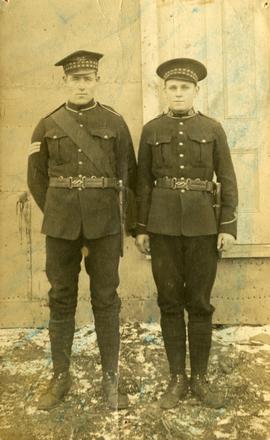 Item is a photograph of two members of the Cape Breton Highlanders taken during the First World War. The two members, identified as D.J. MacDonald and Harold Wadden of the 85th Battalion, are both standing in uniform in front of a wall. 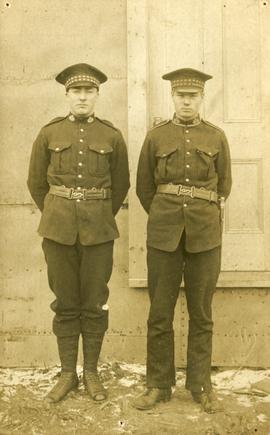 Item is a photograph of two members of the Cape Breton Highlanders taken during the First World War. The two members, identified as D.N. MacLeod and Frank Robbins of the 85th Battalion, are both standing in uniform in front of a wall.

File contains the following documents: a poem titled "Who Killed cock Robin" from the Westminister Gazette; "The War Graves of the British Empire: "The War Graves of the British Empire: The South-East Belgium Group of Cemeteries" with an attached note expressing sympathies to the Liscombe family over the loss of Gerald Liscombe; a photocopy of a chart explaining the relationships between members of the Liscombe family; a pedigree chart; a family tree; three photos of a family record; a letter to Susan Liscombe from H. Gornall, Captain of the 85th Battalion, dated April 22, 1919, expressing sympathies over the loss of Mrs. Liscombe's son, Gerald; and two copies of the family record.

Item is a scrapbook that features newspaper clippings, transcriptions, and photographs pertaining to members of the military from Cape Breton 1915-1983. Included in the scrapbook are the following: Complete service roll of the 24th battery of Canadian Overseas Field Artillery (January 29, 1915); "Lieut. Col. McLeod is Laid to Rest in Flanders; Sixth Battery Mourns for Chief" (December 31, 1915); A newspaper printed photograph of the 25th Battalion CEF (taken 1915, printed August 3, 1963); Transcription of war-related poetry, originally published in the Sydney Post (May 30, 1917); "Rising of N.S. Highland Brigade Recalled" (July 31, 1965); "85th Battalion Had Glorious Service Record in World War 1" (August 9, 1965); and "Memory of 85th Battalion Evoked at Province House" (August 10, 1970). 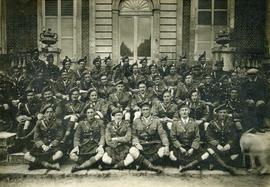 Item is a photograph of Officers of the 85th Battalion (Nova Scotia Highlanders) taken on the steps of a chateau in Lozinghem, France. The officers are wearing their newly issued kilts. J.A. MacKinnon is identified as the sixth from the left in the second row.

Item is a book titled, "The 85th Canadian Infantry Battalion Nova Scotia Highlanders in France and Flanders," written by Lt. Col. Joseph Hayes, D.S.O., C.A.M.C. It features chapters concerning the following: organization and early training; from Witley Camp to Vimy Ridge; Vimy Ridge; From Vimy Ridge to Passchendaele; From Passchendaele to Amiens Arleux and Fampoux; the tables turned at Amiens; the Scarpe Operation Drocourt-Queant line smashed; Bourlon and Cambrai; Valenciennes; the last battle at the Gates of Mons; sports and pastimes at the front; and the Armistice and the happy homecoming.

The Breed of Manly Men: The History of Cape Breton Highlanders